Red Bull Formula One car to feature at Thirlestane 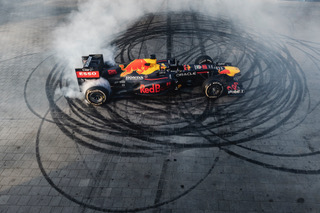 Red Bull has been at the sharp end of the Formula 1 world for many years, helping Max Verstappen to the world title last year.

Visitors will be able to up close and personal and treated to the sight and sounds of a modern Formula 1 car running up the Thirlestane Castle sprint course. Red Bull has agreed to show off the Adrian Newey-designed RB8 car, that Australian star Mark Webber drove to victory on the streets of Monaco in 2012, for the two-day festival.

Webber had qualified the Red Bull on car pole and led from start to finish once the lights went out. At the time he said: “The start was key, the pitstop was key, both of them went well. I did a little bit of work in between and we got an incredible victory that I’m very, very happy with.”

Most fans have to settle for seeing the car from the stands or on TV, although, gamers will be able to ‘drive’ it when the new F1 2022 game is released next month.

Now, they’ll be able to see it live and put through its paces, twice each day during the event, by Patrick Friesacher. The Austrian driver drove for the Minardi F1 team during the first half of the 2005 season.

The car will be on show alongside three stunning title-winning cars driven by Sir Jackie Stewart –the 1969 Matra that powered him to his first championship and the Tyrrell 003 and Tyrrell 006.

The Sir Jackie Stewart Classic, a family-friendly festival –held in aid of Race Against Dementia –will feature live motorsport action, extensive retail, food and drink displays and will celebrate the 50th anniversary of the Borders Vintage Automobile Club and their award-winning classic car show with more than 1,200 vintage and classic vehicles on display.

Sir Jackie Stewart OBE, the Flying Scot will also make appearances throughout the weekend. Make sure you don’t miss out on the chance to see motorsport history.