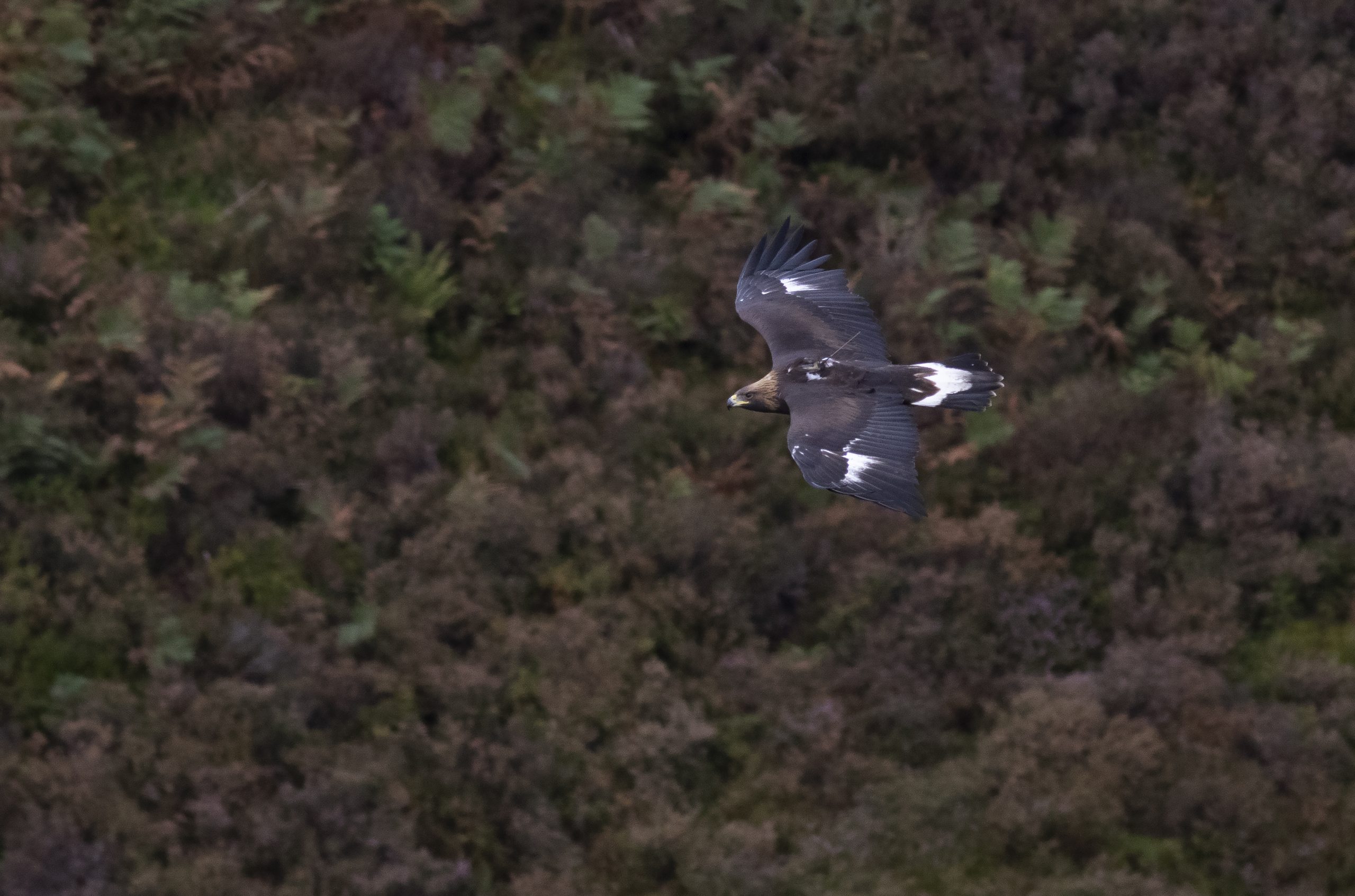 The pioneering South of Scotland Golden Eagle Project has become the first in the UK to successfully translocate free-flying young golden eagles (aged between 6 months and 3 years) to boost a low population of this iconic bird. These new additions bring the total number of golden eagles in the south of Scotland to around 33 – the highest number recorded in the area since the early nineteenth century.

Taking a new research approach, under licence from NatureScot, the team leading the groundbreaking charity project revealed today (World Wildlife Day – Thursday 3 March) that they had successfully caught, transported and released seven golden eagles from the Outer Hebrides. The Outer Hebrides were selected as the source to boost the south of Scotland population because these Islands host one of the highest densities of golden eagles in Europe. The birds were released almost immediately on arrival in a secret location in the southern uplands of Scotland.

The project team is continuing to monitor the birds’ progress to see if they settle and breed in the area. If they do, this could be a groundbreaking for the project.

Throughout the process, the project team followed NatureScot’s strict novel-research guidelines which were assessed by Scotland’s Nature Agency against the Scottish Code for Conservation Translocations. Only a small number of projects have used this technique. If successful it could be used further to support wider raptor conservation programmes. 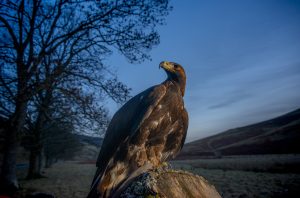 The team has previously (from 2018 to 2021) successfully released 12 young eagles collected as chicks from nests in the Highlands and Islands. This is a process that is much more widely used for raptor conservation programmes. The released eagles have all settled in south of Scotland, with frequent sightings of interactions including with other native eagles.

Explaining the significance of the most recent translocation, Dr Cat Barlow, Project Manager for the Project said: “This new novel-research licence has provided a significant boost in our efforts to ensure golden eagles truly flourish in southern skies. Though it is still early days, this is the first in the UK to trial this approach as part of raptor reinforcement.  This could be a groundbreaking technique for the global conservation management of golden eagles and other raptors. We will continue to monitor these birds to see if they settle, thrive and breed in the south of Scotland, which will be the real measure of success.

“Our work has only been possible due to the support of National Lottery Heritage Fund, our project staff and partners, NatureScot licensing team, raptor specialists, Advisory Panel members, estates, CalMac Ferries and of course the community in the south of Scotland. We’re incredibly grateful to them all.”

Scotland’s Environment Minister Mairi McAllan MSP added: “The success of this project can be traced back to 2007 – golden eagles faced extinction from southern Scotland for a number of different reasons and the Scottish Government made a commitment to achieve positive change. 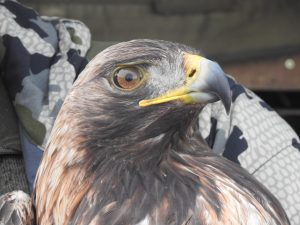 “Thanks to the close partnership working between conservationists and land managers in the south of Scotland, the financial support from sponsors and the world-leading techniques employed by the project, there are now more golden eagles in southern Scotland than there has been for hundreds of years, with birds even being seen in northern England.

“Scotland was one of the first countries to recognise the twin crises of nature loss and climate change, and this project shows what we can achieve with determined efforts to restore our lost biodiversity.”

Francesca Osowska, NatureScot’s Chief Executive, said: “This ground-breaking project has accomplished so much over just a few years, bringing a viable population of golden eagles back to south Scotland and inspiring other similar initiatives around the world. Particularly during the twin crises of climate emergency and biodiversity loss, it’s wonderful to see a success like this.

“Golden eagles are a vital part of Scotland’s wildlife, and we’re passionate about returning them to places where they used to thrive.  This is brilliant partnership working, and a great support for the local green economy.”

In the past, the Project has focused on collecting much younger chicks (aged 6 to 8 weeks) directly from nest sites with twins, but the team has struggled to source a sufficient number of birds, particularly when Covid-19 restrictions were in place. After thorough research and consultation over welfare and ecological issues with an expert Scientific Advisory Panel, the Project identified a new research-based approach involving catching and moving free-flying young golden eagles from a naturally densely populated area.  At every stage, the welfare of the birds has been paramount.

An experienced team of expert raptor ecologists, Dave Anderson and Robin Reid, and Scottish Raptor Study Group member Graeme Anderson carefully caught the young (sub-adult) birds at bait sites in the Outer Hebrides. The team was careful not to select adult or breeding birds, and aged the birds based on their plumages. Five females and two males were housed in specially designed travel boxes and quickly transported by road and sea to the south of Scotland. The birds were satellite tagged by licensed individuals and swiftly released. 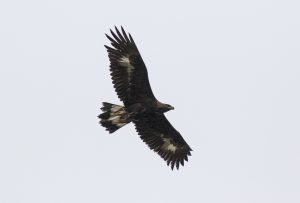 Andrew MacNair, Head of Marketing at CalMac Ferries, who supported the careful transportation of the birds, said: “We are truly honoured to have been able to support the South of Scotland Golden Eagle Project’s groundbreaking research. As well as global environmental and economical threats such as climate change, Scotland continues to face its own environmental challenges, and we all have a role to play in protecting it for future generations to enjoy.”

Caroline Clark, Director for Scotland, The National Lottery Heritage Fund, who have provided key funding for this work, said: “This translocation of seven eagle subadults is fantastic news for the biodiversity of the South of Scotland, and for the world as a whole. It is great to see the partnership successfully working, and the way communities across the South of Scotland have embraced and supported the new arrivals.

“Thanks to National Lottery players, the £1.5m funding we have provided to the South of Scotland Golden Eagle Project means they can play their part in protecting Scotland’s outstanding wildlife and landscapes.”

The seven new arrivals have been named by a range of individuals, school children and organisations. Sir E Scott School on Harris in the Outer Hebrides, where the eagles came from, named their eagle Rowan – the project is forging links between the school and Sciennes Primary School in Edinburgh.

Project partners RSPB Scotland, Scottish Land & Estates, Scottish Forestry, NatureScot and the Southern Uplands Partnership, had worked on the project together for more than 11 years before releasing the first eagle chicks in 2018.  Funded by The National Lottery Heritage Fund, project partners and the Scottish Government, the initiative is a key project under ‘Scotland’s Biodiversity. A Route Map to 2020’, supporting the Government’s ‘2020 Challenge for Scotland’s Biodiversity’.

For the latest project and festival news, or to donate to the charity initiative, visit: www.goldeneaglessouthofscotland.co.uk