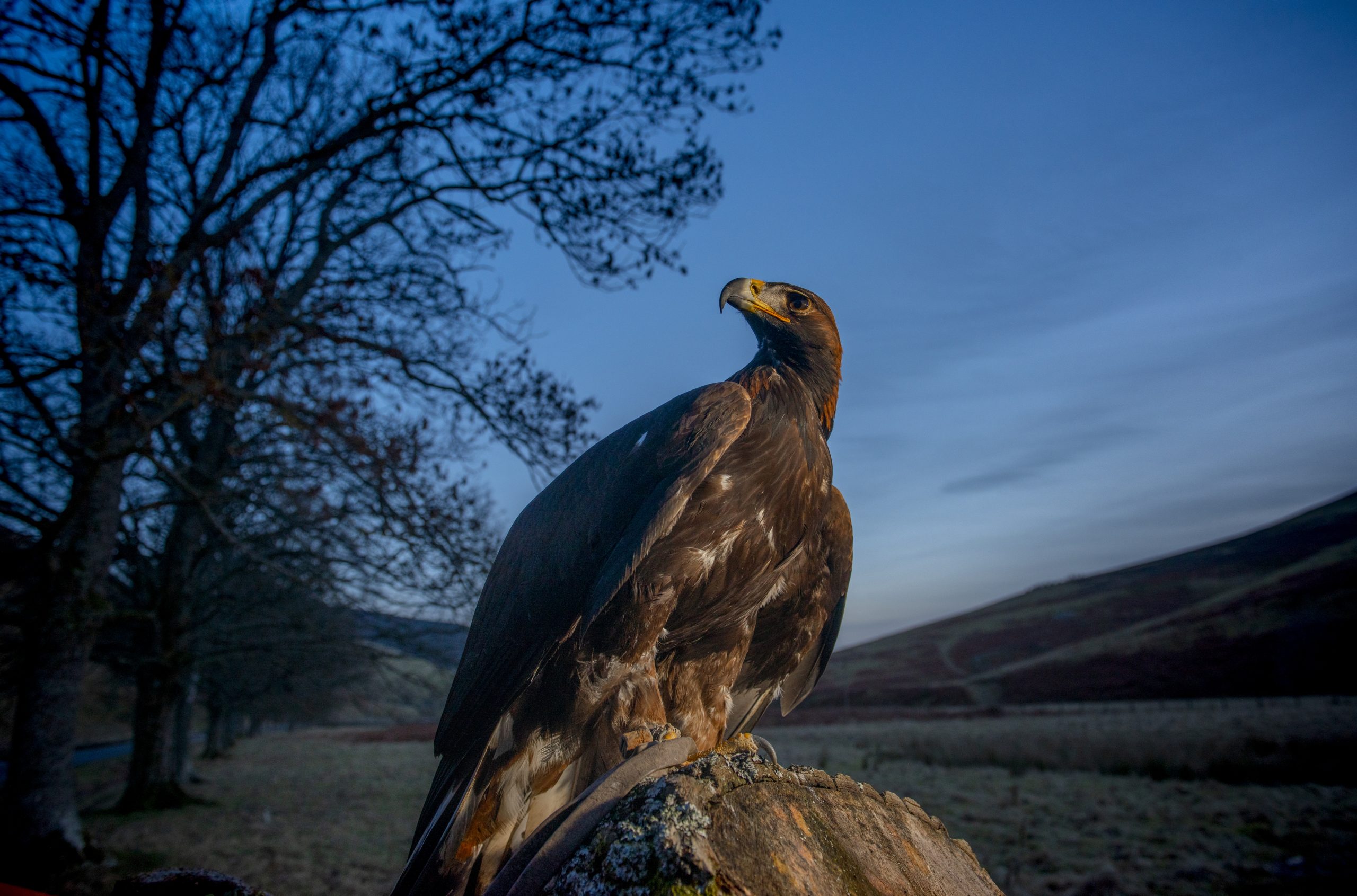 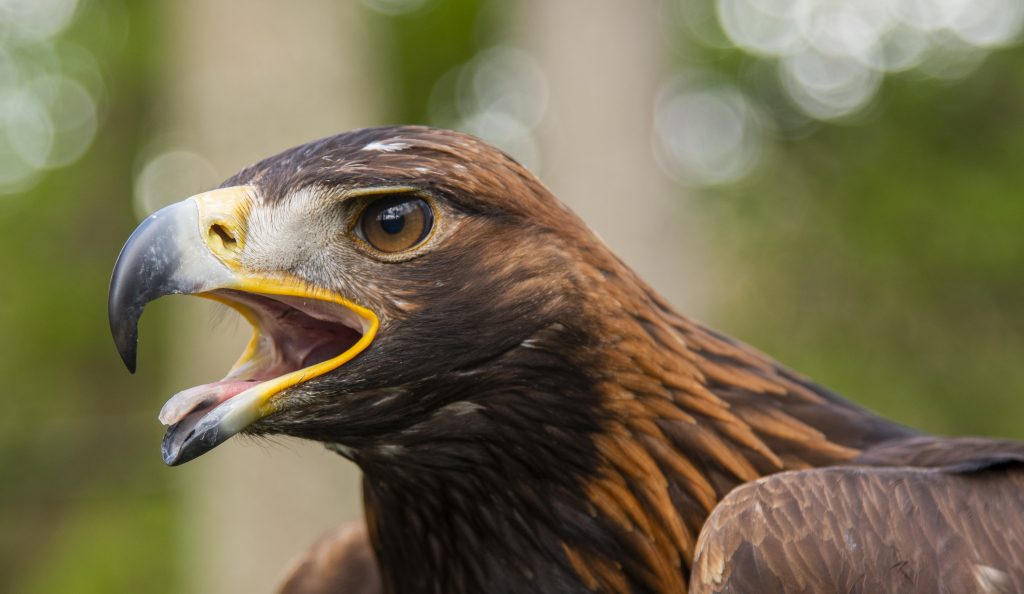 News of the birds’ translocation comes as the charity Project prepares to celebrate the new arrivals at the UK’s first Golden Eagle Festival in Moffat, funded by The National Lottery Heritage Fund.  The festival takes place between 19 and 26 of September 2021 and has been organised to help secure vital support for the charity’s continued conservation efforts and celebrate the vibrant town of Moffat becoming Scotland’s (indeed the UK’s) first Eagle Town. With a keynote speech by Gordon Buchanan, a family fun day, a Big Tree Climb, and live music sessions, the festival will also showcase ways in which people can help golden eagles to flourish in southern skies once again.

Speaking about the arrival of the project’s eight new golden eagles Cat Barlow, Project Manager for the South of Scotland Golden Eagle Project said: “Covid-19 affected so many of our plans last year, so it is absolutely amazing now to see these eight youngsters settling into the south and soaring majestically above the Moffat Hills. We are truly thrilled to host our first Eagle Festival to celebrate the new arrivals and thank all our supporters for the vital contributions they make to helping us increase the golden eagle population in the south of Scotland.

“Our success is very much thanks to the incredible support we’ve had from our partners, raptor experts, vets, funders, community groups, high profile ambassadors and estate owners and managers.”

WildLand Limited donated one of the project’s newest arrivals from their landholding within the Cairngorms Connect partnership area.  Speaking about their involvement Thomas MacDonell, Director of Conservation and Forestry at WildLand Ltd said: “As part of Cairngorms Connect, we are firmly committed to enhancing habitats, species and ecological processes. Indeed, golden eagle numbers are steadily increasing at WildLand Cairngorms under our careful land management.  We were absolutely delighted that we could donate one of our golden eagle chicks to help the important work of the South of Scotland Golden Eagle Project in reinforcing the population in the south of Scotland.”

“The project took great care in selecting the chick for translocation and making sure she was fit for her journey south. We, along with many others, will follow her onward journey with great interest. We hope she settles quickly into her new home.”

Francesca Osowska, NatureScot’s Chief Executive and a passionate supporter of the Project, added: “The key aim of this exciting project is to increase the number of breeding pairs in the south of Scotland, a vital part of our work to reverse biodiversity loss and combat the climate emergency. With wildlife declining across the globe, it is fantastic to hear that the project has translocated so many eagle chicks this year. Golden eagles are an exciting part of Scotland’s wildlife, and we’re passionate about returning them to places where they used to thrive.  This is brilliant partnership working, and a great support for the local green economy.  Already, we are seeing great success”

Led by the South of Scotland Golden Eagle Project, Scottish Raptor Study Group workers in the Scottish Highlands carefully collected chicks earlier this year under license from NatureScot, before taking them to the release site in a confidential location in the Moffat Hills. The birds were then cared for in specially-designed release aviaries and supplementary fed to help them adjust to their new habitat before their release. Experts at the University of Edinburgh’s Royal (Dick) School of Veterinary Studies also provided considerable support throughout the process to monitor the health and wellbeing of the birds.

Caroline Clark, Director for Scotland, The National Lottery Heritage Fund, said: “This translocation of eight eagle chicks is fantastic news for the biodiversity of the South of Scotland, and for the country as a whole. It is great to see the partnership working which has created this success, and the way the communities across the South of Scotland have embraced and supported the new arrivals.

“Through our conversations with National Lottery players, we know that nature is incredibly important to them, and the £1.3m funding given to the South of Scotland Golden Eagle Project means they can play their part in protecting Scotland’s outstanding wildlife and landscapes.”

The birds’ names were chosen shortly before their release. Iolo Williams, host of BBC’s Spring Watch and Autumn Watch chose the name “Iona” for one of the eagles. He said: “Thank you for the honour of being asked to name one of the eagles released in the south of Scotland this year. I wish Iona all the best and hope she’s given time to settle and breed in the south of Scotland before too long.”

Project partners RSPB Scotland, Scottish Land & Estates, Scottish Forestry, NatureScot and the Southern Uplands Partnership, worked on the project together for more than 11 years before releasing the first eagle chicks in 2018.  Funded by The National Lottery Heritage Fund, project partners and the Scottish Government, the initiative is a key project under ‘Scotland’s Biodiversity. A Route Map to 2020’, supporting the Government’s ‘2020 Challenge for Scotland’s Biodiversity’.

For the latest project and festival news, or to donate to the charity initiative, visit: www.goldeneaglessouthofscotland.co.uk