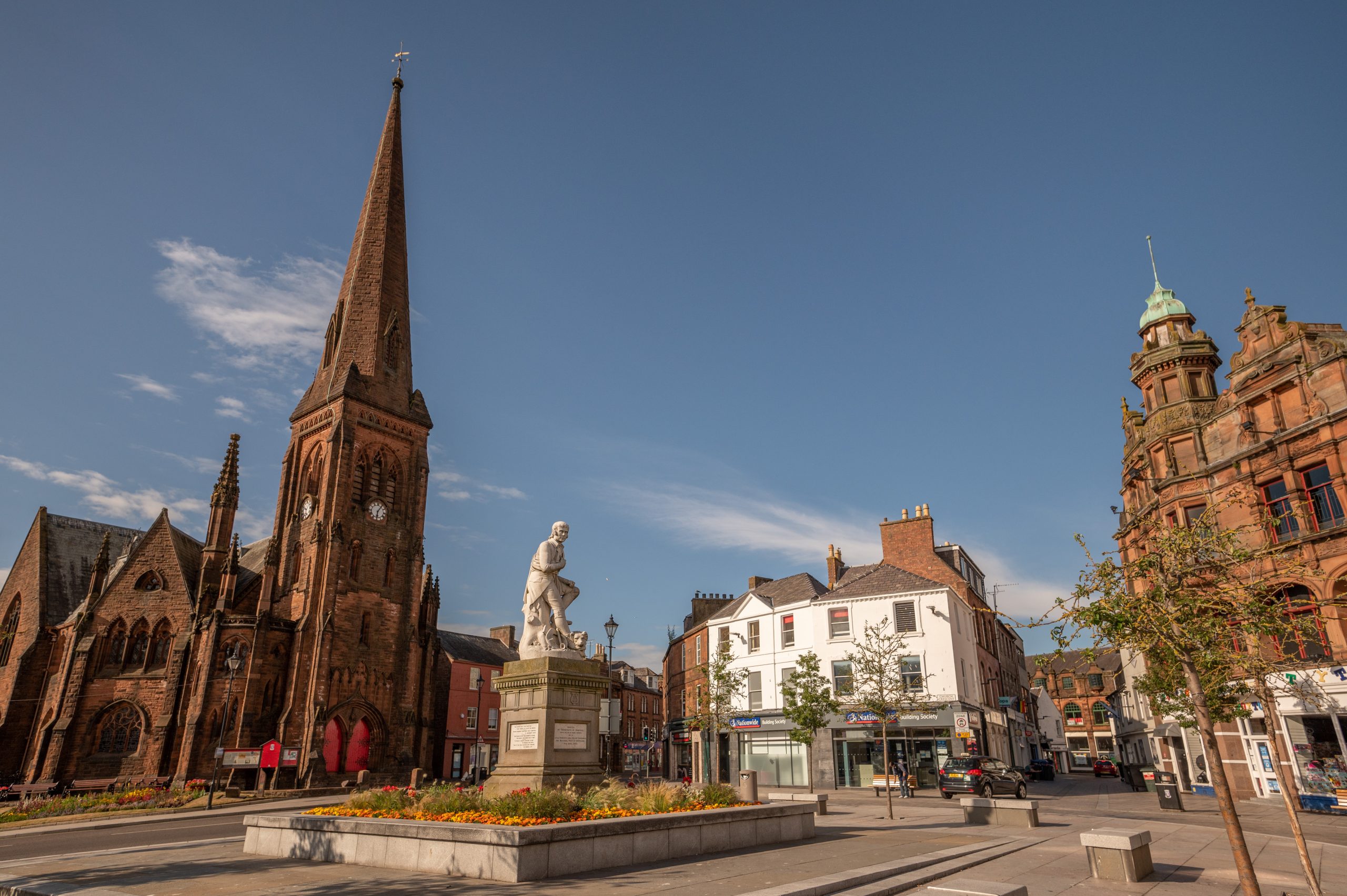 This summer, StoryTrails, the UK’s largest immersive storytelling experience, invites residents of Dumfries and Dundee to explore untold and local stories about each town through ground-breaking multimedia technologies. Actress and Dumfries resident Joanna Lumley and Dundonian athlete Eilish McColgan are among the narrators of stories that range from Dundee’s forgotten Olympians, to Dumfries’ annual crowning of the ‘Queen of the South’.

StoryTrails, part of UNBOXED: Creativity in the UK, comes to Scotland with two, free live events taking place on 12 and 13 July in Dumfries, as part of a tour of 15 towns and cities across the UK this year. Centred around the Ewart Library in Dumfries, as well as on the streets of the towns themselves, the events feature digital experiences that allow people to experience their town in completely new ways through the magic of augmented (AR), virtual reality (VR) and immersive cinema. The Scottish StoryTrails events are part of Scotland’s Year of Stories 2022 partner programme.

In Dumfries, the AR trail has been developed by local Mobile AR TrailMaker DJ McDowell and is narrated by actress Joanna Lumley. The trail celebrates Dumfries’ 90-year tradition of crowning a ‘Queen of the South’ at the annual Guid Nychburris or Good Neighbours Festival. The trail features queens throughout history, from crowd-pleasing carnival queens to rebel queens, and modern-day community queens, who defy stereotyping.

In Dundee, the trail has been developed by local Mobile AR TrailMaker Duncan Cowles and is narrated by Dundonian Olympian, runner Eilish McColgan. It follows the story of two of Dundee’s sporting heroes, Dick McTaggart, who in 1956 won an Olympic gold medal in amateur boxing, and Sarah ‘Cissie’ Stewart, who won Dundee’s first Olympic medal in 1921 for swimming. Both athletes achieved Olympic glory, yet it was only Dick that was recognised on his return from the Games.

Both AR trails use cine film and video home movie footage, and photography from the BBC and British Film Institute, as well as local and national archive materials to present a window into the past. Visitors can borrow devices from the library and follow a guided augmented reality trail which run on the hour throughout the live events. They can also download the StoryTrails app on their smart phone and follow the story trail route from outside the libraries. Both trails can also be experienced via the mobile app outside of the two live events, with the app available to download until the end of the year.

At each location there will also be a physical installation unique to the town and viewed on a cycloramic cinema screen set up inside the libraries. Immersive virtual maps of the towns have been created using 3D scans of the local buildings, people, objects and areas, telling stories of people and place. This 15-minute film will play on a loop throughout the day. An expanded version of the map can also be viewed on iPads inside the library.

Duncan and DJ were two of just 50 emerging creatives around the UK to be selected to take part in the development of StoryTrails and benefit from expert training and mentoring opportunities from StoryFutures Academy, the National Centre for Immersive Storytelling, the team behind StoryTrails. StoryFutures Academy is run by Royal Holloway, University of London and the National Film and Television School (NFTS).

DJ said: “It’s taken months of work to get to this point and we can’t believe we finally get to share it with everyone. We’ve unearthed incredible stories of powerful local characters that deserve to be told. We’ve worked closely with BFI and BBC archives to help tell those stories and we’re using new technologies like AR to bring them to life in a way that makes them accessible to all. If you don’t have a smartphone you can borrow one on the day – come along to the library in July and you’ll be able to give it all a go, for free.”

Time travel continues inside the libraries across the two live event days, when visitors enter digitally created worlds using a virtual reality (VR) headset. They can expect to find themselves in the shoes of a rebellious teenager as she discovers her mother’s punk past; take part in one of the many South Asian daytime raves that took place across the UK in the 1980s and 1990s; and hear what earlier generations thought life would be like today. All the stories featured on the VR headsets are available at every stop on the StoryTrails UK tour.

Travel back through time

Historian and television presenter David Olusoga, familiar to viewers of the BBC’s A House in Time, narrates a further AR experience that invites visitors to turn a dial on a virtual giant radio and travel back in time. From Beatlemania and the flares and haircuts of the swinging sixties, to dancing to the end of the millennium in crop-tops and trainers, audiences will experience a potted history of the UK through the decades.

This innovative project is led by StoryFutures Academy, the National Centre for Immersive Storytelling. It was developed by teams of leading technologists and creatives, brought together for UNBOXED: Creativity in the UK, a UK-wide celebration of creativity taking place in 2022, including immersive animation pioneers, ISO Design and Nexus Studios, and the company behind Pokémon GO, Niantic. It is brought to life in The Reading Agency’s national network of libraries and by event-making specialists ProduceUK.

Professor James Bennett, Director of StoryFutures and StoryTrails, said: “This is about getting people excited about where they live – helping them connect with stories of their town from the past and present through a new lens. New technologies like AR and VR can help build these connections and reignite people’s passion for the past. These technologies are for everyone – we want to find ways to engage people from all generations and spark a genuine celebration in each of our incredible locations.”

Martin Green CBE, Chief Creative Officer UNBOXED: Creativity in the UK, said: “StoryTrails is one of ten ground-breaking UNBOXED projects taking place in 2022 that demonstrate the power of creative collaboration across science, technology and the arts to create extraordinary and never-seen-before public experiences. StoryTrails uses cutting edge technology to offer people the opportunity to hear about the places they live – the stories of individuals and communities – in a way that has not been done before.”

StoryTrails’ 15-stop UK tour runs from 1 July to 18 September 2022 and culminates in a new film presented by David Olusoga that will screen in UK cinemas and BBC iPlayer. The StoryTrails app, augmented reality story trails and immersive maps will be available throughout 2022. The Reading Agency’s annual Summer Reading Challenge, for children aged 4 to 11, takes a StoryTrails theme.

UNBOXED: Creativity in the UK is funded and supported by the four governments of the UK and is commissioned and delivered in partnership with Belfast City Council, Creative Wales and EventScotland.

The StoryTrails app will launch on iTunes and Google Play stores to coincide with the event. The app and immersive trail will be available online throughout 2022.