Performing pigs, sheep that leap and dogs of all kinds – all at Galloway Country Fair

The Galloway Country Fair will host some of Britain’s most talented birds and animals – including performing pigs, fence leaping sheep, beautiful birds of prey and dogs of all kinds.

Among the attractions at Drumlanrig Castle, from 20-21 August, will be the Lamb National which sees a small flock of Herdwick sheep, complete with teddy bear jockeys (and names like Ed Sheerin) gallop round a circuit, leaping jumps along the way.

It’s organised by Bob Hogg whose son Tom will also be there with his own event, The Hogg Show, which involves around seven of his pigs including Kunekunes, middle whites and Mangalicas.

It’s not only a chance to learn about the special qualities of different breeds but to see them show off their skills and agility.

Tom, previously worked with sheepdogs but wanted to diversify and on the principle of “don’t look too far from home for your destiny” realised his surname to point the way forward.

He said: “Pigs are wonderful animals, incredibly bright, and you develop a really strong bond with them.”

Based in Oxford, Tom is especially fond of Berkshire’s which he says are “soft and gentle animals”. 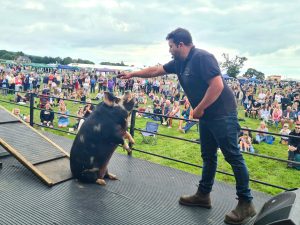 See the amazing intelligence of pigs at the Hogg Show at the Galloway Country Fair.

His dad, who Tom describes as “one of the best handlers in the country”, got the idea for The Lamb National when they were helping move sheep on a farm.

“It was a flock of Herdwicks and we were quite amazed. The field walls had holes in them for sheep to go through but they just didn’t bother, they just leapt straight over.

“These are sheep that won’t do anything they don’t want to, and I’ve seen them clear a five-bar gate. We have fences in a field for training, but quite often when we go down there they will be jumping over just for the fun of it.”

Phil Gibbons will fly his birds of prey, from Ridgeside Falconry, in the arena and there will also be a static display where visitors can see owls, eagles, hawks and falcons. 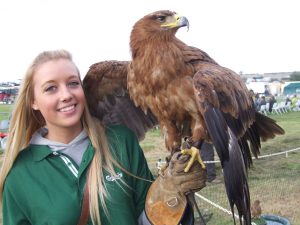 He will also be presenting Little Nippers, an event where visitors can give their own dogs – anything from terriers to lurchers – the chance to hurtle round an obstacle course in pursuit of an electric rabbit.

While it’s supposed to be a race (spoiler alert) the rabbit always wins.

And if speed isn’t your dog’s strength you can always enter it in the pet show, where it’s looks and character that count.

Or there are the gundog scurry and retriever and spaniel tests.

With all that to enjoy, the organisers are expecting that visitors will be working up quite an appetite – not a problem as this year’s show has food and drink as central theme. There will be:

· A food and drink marquee with a variety of stalls · Cooking demonstrations with the Station House cookery school and Auldgirth Inn.

· The return of the Buccleuch Bake Off.

Visitors can also enjoy a large craft marquee with local stalls and there will be the fabulous Kids’ Fun Zone where many activities are free. There will be field sports – from angling to clay pigeon shooting – to watch and to try.

Galloway Country Fair, sponsored by Lloyd Ltd, will be a brilliant family day out celebrating rural life, with the excellent main ring entertainment, local food and drink and crafts, free kids entertainment, come and try field sports and this year it is collaborating with Land Rover meet-up DefenderJam.