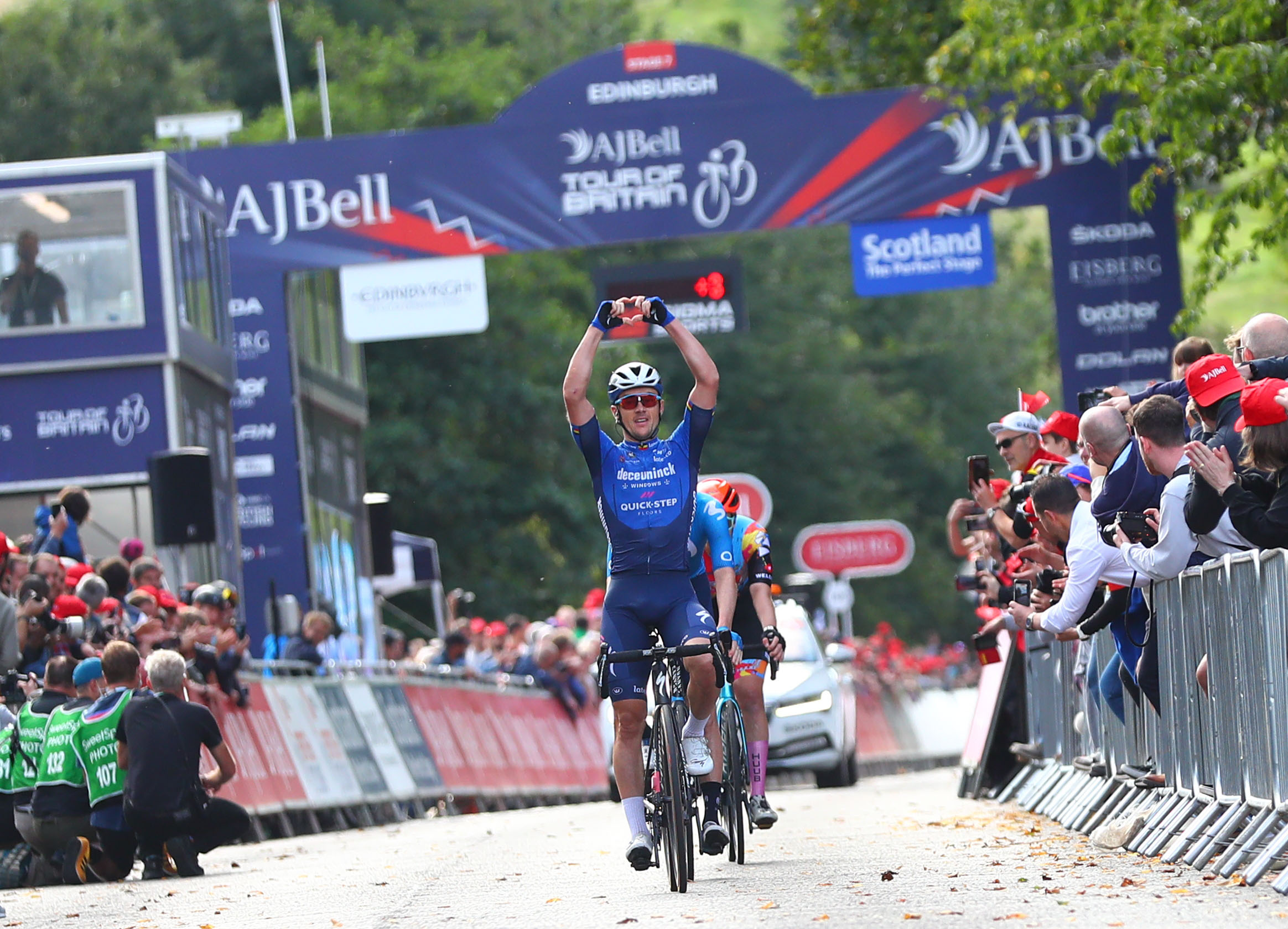 Belgian rider Yves Lampaert took Deceuninck – Quick-Step’s first victory of the AJ Bell Tour of Britain in Edinburgh on Saturday at the end of a stage dominated by a six-man breakaway group.

Lampaert outsprinted Matteo Jorgenson (Movistar Team) and Ribble Weldtite Pro Cycling’s Matt Gibson in the world-famous Holyrood Park after the trio broke away on the outskirts of the Scottish capital.

INEOS Grenadiers rider Ethan Hayter finished safely within the peloton to retain his overall lead and move to within a day of becoming the first British winner of the national tour in five years.  Hayter has also sealed the Sportsbreaks.com Points jersey with an insurmountable lead going into the final stage, providing he finishes the race.

“It was a good day all round because we kept the jersey and have one day left to go. Having a strong team is probably more important than being a strong rider at the end of the day like today – Richie [Porte] and Owain [Doull] have ridden on the front for the past two days, which is pretty impressive,” said Ethan Hayter speaking after the stage finish.

“It’s probably going to kick off tomorrow, it always does on the last day of a stage race. I’ll do my best to beat Wout if it does come to a sprint.” 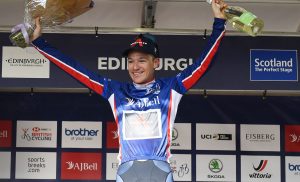 Commenting after his win, Yves Lampaert said; “It was quite nervy. There were three of us in the lead, so it’s always difficult to finish it off. But I took the wheel of Gibson – I heard on the radio that he was quite fast. I did quite a long sprint; I started at 250 [metres] to go and I held it to the line.

“I’m really happy. I’ve worked to a make a lot of team victories but today I could finish it off for myself. That’s a huge relief. Every victory has a special place in my heart, and it’s not that I win every week, so I’m really happy.”

Lampaert, Jorgenson and Gibson had been part of a six-rider group that broke away early on the stage from Hawick, along with Lampaert’s Deceuninck – Quick-Step teammate Davide Ballerini, Pascal Eenkhoorn (Jumbo Visma), and TRINITY Racing’s Christopher Blevins.

The sextet built a lead of nearly 10 minutes and were allowed their head coming into Edinburgh as INEOS Grenadiers controlled the gap to ensure the race didn’t come back together and that Wout van Aert (Jumbo Visma) couldn’t collect any time bonuses to threaten Hayter’s lead.

Blevins was the first to be distanced with 20 kilometres to go on an unclassified climb out of Ford before Lampaert attacked with 8.5 kilometres to go splitting the group.  Jorgenson reacted first to get onto the former Belgian champion’s wheel with Gibson putting in a concerted effort to then get across to the pair reaching them with five kilometres remaining. 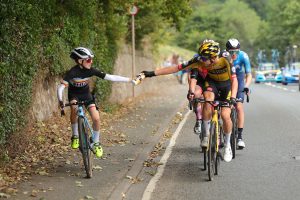 Pascal Eenkhoorn of Jumbo Visma hands a bottle to a young cyclist riding along side the breakaway. Credit: SWpix.com

And then there were three…

The trio then worked well to distance Eenkhoorn and Ballerini but coming into Holyrood Park it was the Ribble Weldtite rider on the front with his two World Tour rivals using their experience to force Gibson to lead out the sprint to the line.

Jacob Scott (Canyon dhb SunGod) retains both the ŠKODA King of the Mountains and Eisberg Sprints jerseys and will win both providing he finishes Sunday’s stage.

The AJ Bell Tour of Britain concludes with Stage Eight from Stonehaven to Aberdeen over 173 kilometres (107.6 miles) including the famous ŠKODA King of the Mountains climb of Cairn o’Mount early in the stage plus intermediate Eisberg Sprints, with their time bonuses, at Finzean, Aboyne, and Ballater.